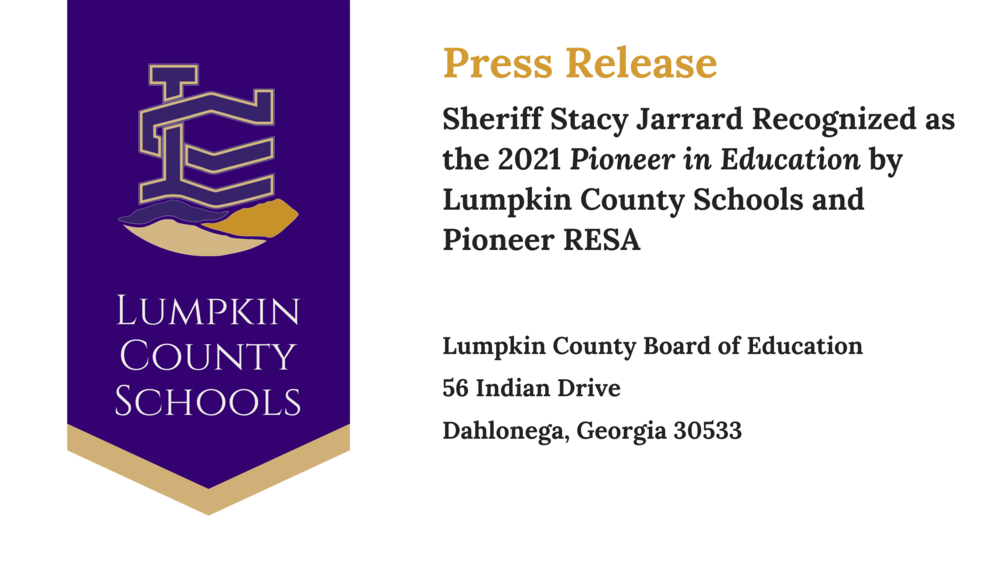 Stacy has served in different capacities within the Lumpkin County Sheriff’s Office, and has been our Sheriff since being elected to the position in November 2008. With the goal to make the Lumpkin County Sheriff’s Office the most professional agency possible for the citizens of our community, Sheriff Jarrard led the charge for his office becoming the 14th in Georgia to achieve state certification.

As a partner to our school district, Sheriff Jarrard remains committed to providing all five of our schools with a dedicated, full-time school resource officer. Not only are the school resource officers in our buildings and on our campuses every single day, but Sheriff Jarrard visits our schools and district office several times every week.  On any given morning or afternoon, you might see the Sheriff directing school traffic or teaching DARE lessons in all three of our elementary schools.  On Friday nights every fall, it’s Sheriff Jarrard leading the chain gang on the sidelines of our football field with his fellow Rotarians.

In the summertime when our schools are not in session, Sheriff Jarrard and the SROs teach a Junior Law Enforcement Academy and offer a driver’s education program for our 15-and-16-year-old students. Sheriff Jarrard further strives to serve Lumpkin County by offering hunter safety courses, firearms classes for citizens, continuing the Citizen’s Law Enforcement Program, and instituting the AT-EASE calling program (Assistance To Ensure A Safe Environment).

It’s without hesitation that we honor Sheriff Jarrard as our Pioneer in Education for Lumpkin County Schools this year. He is an exceptional public servant with a heart for children, and we are grateful for his leadership and his commitment to Lumpkin County.